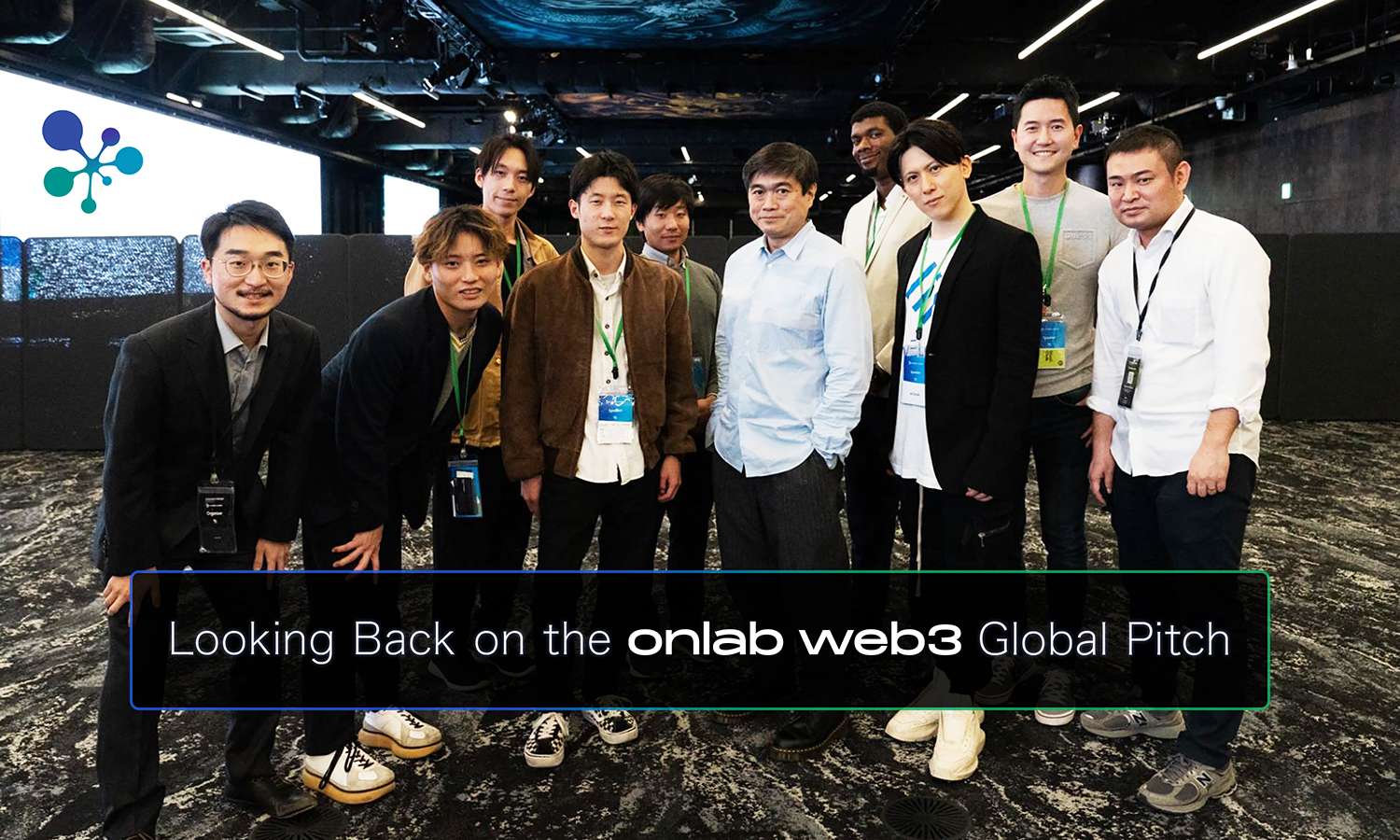 The Global Incubation Program “onlab web3” was formed in September of 2022 as a means to challenge the future generation of business by using the blockchain and is a project that aims to build a global ecosystem connected to web3. The general public was invited to apply from September and after an approximate month and a half of screening over 60 companies, eight projects were selected to be supported by onlab web3, Digital Garage, and the others hereafter. This article is split into web3 startups and projects from overseas who are aiming to expand into the Japanese market known as “Unlock Japan,” and Japanese web3 startups who are also aiming to enter the global market known as “Born in Japan.” Introductions for the eight selected companies among over 60 applicants and the details of each pitch are summarized and shared here.

First up is the overseas startups with Unlock Japan proposing a new world of web3 to the Japanese market. Two companies that took the stage will be presented (one other undisclosed company is also included).

“Dixel Club,” a service to create NFTs without using any code and winner of the “Unlock Japan Award.”

Dixel Club is a startup service developed in Korea where, regardless if you are not a designer or engineer, NFT collections can be issued without any code needed. It’s supported by the largest Swiss accelerator of financial technology “F10” and the layer-1 blockchain “Klaytn” developed by Korea’s largest mobile platform “Kakao.”

Although it has become easier to get NFT projects up and running using existing no-code tools, it was always necessary to rely on designers for the design portion of these projects. Dixel Club allows you to create NFT collections based on easily drawn up pixel art, even if you aren’t a designer yourself. The key feature of Dixel Club is the ability to create NFT collections from the bottom-up and in an interactive manner. The user who wants to get a project started designs a single, original pixel art, and the user who wants to mint a NFT only needs to change this design within a predetermined range and to their liking.

CEO Cho states that over 10,000 NFTs have been launched through Dixel Club, and over 2600 NFTs have been minted through their compatibility with the Ethereum, Polygon, BNB, and OKC Klaytn blockchains. The produced NFTs are being used for things like community formation and within DAOs. Some examples of their use include being used for event lottery tickets and the operation of communities where continuous runners can receive NFTs as a reward. Dixel Club will aim to take over the minting marketplace as an interactive platform to create NFT collections.

Dixel Club was selected as the first place recipient of the “Unlock Japan Award.” Company Representative Cho stated with great enthusiasm that, “We’re grateful to receive this award. We’re thinking we would like to enter the Japanese marketplace, so this will be a great opportunity for us. We would like to continue to grow within Japan or even internationally.”

“Rocket Capital investment,” a hedge fund that makes use of the knowledge of data scientists around the world.

Royal Capital investment is a startup with its roots in Singapore that is a decentralized hedge fund that specializes in investment management of cryptocurrency assets. For this, it utilized the knowledge of over 2000 data scientists from all over the globe. In fact, Royal Capital investment has even received a license from the Monetary Authority of Singapore, making it a financial institution.

Data scientists around the world participate in the financial data analysis competition held by Rocket Capital investment every week. The participants download and train an investment model base in order to submit a marketplace forecast. These forecasts are recorded on the blockchain, which makes it impossible to tamper with them. The forecasts are compared to the actual marketplace performance after one week, and the winner with the most accurate forecast receives tokens as a reward.

Following this will be the introduction of “Born in Japan,” where web3 projects developed in Japan take the stage.

The first to make their appearance for Born in Japan was “Draw2Earn.” They are attempting to construct a completely decentralized and autonomous fully on-chain marketplace.

Many NFT projects are not completely maintained on-chain, as the data is stored outside of the blockchain in places like HTTP servers and the IPFS. This is due to the high energy costs associated with attempting to save a high volume of data on the blockchain. A true autonomous decentralized product cannot be constructed unless a complete fully on-chain NFT is being used. Draw2Earn is the solution to this problem.

Draw2Earn is a service that can mint a full on-chain NFT by taking an image drawn by a user, compressing it using its own proprietary technology before recording it on the blockchain. The drawn image is managed by the On-Chain Asset Store where 97.5% of the sales are automatically paid to the creator, if another user makes use of it. Draw2Earn plans to implement a completely autonomous and permissionless decentralized marketplace through smart contracts that won’t require any operational management. This will be done by only working with fully on-chain assets that store all data on the block chain.

Kanjyo offers a decentralized payroll protocol for web3 projects. Kanjyo envisions a world where wages can be paid using tokens and cryptocurrencies in trustlessness.
Using cryptocurrencies to pay wages for work done with international projects has certain benefits such as being cheaper than bank transfers and the ability to receive payment quickly. Payroll through cryptocurrency will open the doors to many wanting to work on international projects. This is due to the fact that around 2 billion people throughout the world do not possess a bank account.

However, there are drawbacks associated with the use of cryptocurrency for payroll including the initial high cost associated with establishment, selling pressure due to vesting that also goes hand in hand with the potential for the value of tokens to decrease. Additionally, there are many projects with high levels of anonymity within web3 projects. This makes it difficult to dispel concerns over whether wages will be properly paid out in the first place. Appropriately handling the laws and taxation systems for various countries is also another issue.

Kanjo will become a service that can pave the way as the solution to all of these issues through a decentralized payroll protocol.

“wΞlock,” a smart lock authentication system and winner of the “Born in Japan Award.”

wΞlock will develop a web3 authentication system for smart locks.
The scene that CEOTachibana witnessed when participating in an event that used NFTs as an entrance ticket was a considerably long queue. This long queue was caused by the need to verify NFT entrance tickets that participants were required to display using a smartphone at the reception. A scene straight out of the analogue era amidst the digital NFT era. Tachibana stated that, “This isn’t a problem as simple as the automation of authentication, but rather an essential issue that lies in the disconnect between web3 and the real world.”

What wΞlock developed to address this is a system that allows access control to be permissionless into locations and spaces just by having a designated NFT. Utilizing this technology allowed for the automatic opening and closing of smart locks. It’s anticipated that this technology can be used not only at designated events, but also at restaurants, hotels, and to unlock automobiles. This technology has already been patented in Japan and Singapore.

wΞlock was selected as the recipient for the “Born in Japan Award” in recognition of its patents and due to the fact that its proof-of-concept has already been demonstrated. The judges offered some comments stating that, “We believe the welock project is one that will be used across the globe. It is a cool and practical project.”

UI Bounty is a protocol that will provide matching for full on-chain games and front-end engineers. By providing developers a way to distribute budgets, the front-end decentralization of blockchain games will press forward.

Founder of the project askyv states that, “With blockchain gaming, there should be a decentralization of the front end because users are looking for a better experience as it is open source and anyone can read and write the on-chain data.”

UI Bounty is aiming to simplify the creation of derivative works that are optimized to the preferences and interests of individual users and improving the efficiency of AB tests for the UI/UX of games. This will be done through the decentralization of the front end of full on-chain gaming.

When a user selects a game developed by a front-end contributor, UI Bounty will measure how many users played it on each front end. UI Bounty will then automatically distribute smart contracts to developers based on this measurement and the budget contributed by the core team. askyv stated that, “From this, we’d like to create a matching pool for on-chain games and front-end developers.” By having games and UI Bounty operate as one organic unit, transparency will automatically increase and tamperproof budget distribution will be implemented on-chain.

Napier Finance, which offers fixed rate Defi projects, is working towards a fixed rate market that is community driven and has an integrated liquidity pool.

onlab web3 Global Pitch came to a close with Dixel Club and wΞlock being awarded the Grand Prize, but web3 is certainly still in its early stages. We expect to see many more startups coming up in the future.

onlab web3 holds web3 startup pitch events every month, and the onlab web3 Global Pitch is set to be held annually. All web3 startups should be sure to check it out.